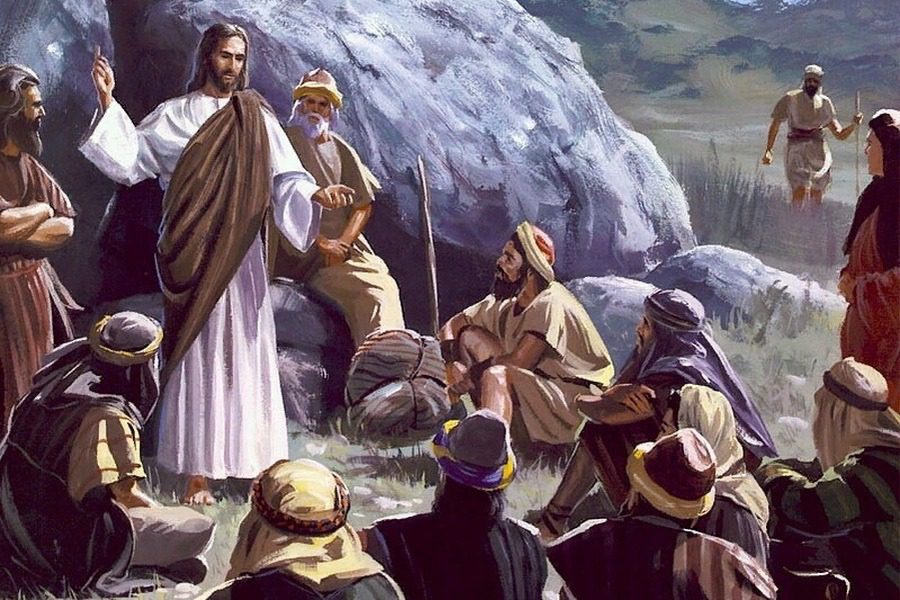 Who is the Son of Man?

I would like to discuss an incident where Yeshua of Nazareth (Jesus) was interrogated by the high priest Caiaphas prior to his crucifixion: “Then the high priest said to him, “I put you under oath before the living God, tell us if you are the Messiah, the Son of God.” Jesus said to him, “You have said so. But I tell you, from now on you will see the Son of Man seated at the right hand of Power and coming on the clouds of heaven.” Then the high priest tore his clothes and said, “He has blasphemed! Why do we still need witnesses? You have now heard his blasphemy” (Matt 26:63–65). As we can see from this passage, Yeshua’s response so obviously proclaimed His equality with the God of Israel that it was perceived by the high priest as “blasphemy.” Why was Yeshua’s statement so unacceptable to the high priest?

Let’s examine Yeshua’s response: “You have said so” (Matt 26:64). In his reply, Yeshua confirms that the high priest has just pronounced that Yeshua was the Messiah, the Son of God. In the second part of His answer, Yeshua proves His divine messianic identity by claiming to be “the one who comes on the clouds of heaven.” In the Hebrew Bible, the divine title “coming on the clouds of heaven” has been exclusively attributed to the God of Israel: “There is none like the God of Jeshurun, who rides the heavens to your aid, and the clouds in His majesty” (Deut 33:26); “Sing to God! Sing praises to His name. Exalt the One who rides on the clouds – His name is the LORD – and rejoice before Him” (Psalm 68:4), and “To Him who rides upon the highest heavens, which are from ancient times; behold, He speaks forth with His voice, a mighty voice” (Psalm 68:33). However, numerous biblical and apocryphal texts portray “another” distinct divine figure as “coming on the clouds of heaven” who exhibits YHWH’s authority (the sacred name of the God of Israel). That mysterious entity was understood in some Second Temple Jewish movements as a divine Messiah (in Hebrew Mashiach). This phenomenon was so challenging and perplexing that it lead to the emergence of the theological concept of the “Two Powers in Heaven.” That perspective tried to smooth out the co-existence of “two” YHWH’s in heaven. Thus, Yeshua’s self-identification with “the Son of Man coming on the clouds of heaven” was understood by the high priest as a reference to the divine Messiah. Such claim certainly sounded offensive and blasphemous to the high priest.

One of the most prominent biblical texts depicting a divine, omnipotent Messiah is recorded in the exilic vision of the prophet Daniel (6th century BCE): “13 I kept looking in the night visions, and behold, with the clouds of heaven One like a Son of Man was coming, and He came up to the Ancient of Days And was presented before Him. 14 “And to Him was given dominion, glory and a kingdom, that all the peoples, nations and men of every language might serve Him. His dominion is an everlasting dominion which will not pass away; and His kingdom is one which will not be destroyed” (Daniel 7:13–14). In this vision, the Lord reveals to Daniel an event taking place in the unseen realm. The prophet beholds a divine figure, “One like a Son of Man,” coming on the clouds and being granted universal, eternal dominion over all nations and generations by the Ancient of Days (the God of Israel). Moreover, that Son of Man is to be served, glorified, and worshipped by every living creature.

A similar image of the Son of Man is portrayed in some extra-biblical Jewish texts. For example, the Book of Enoch, written approximately in the 2nd century BCE, speaks of the Messiah as a distinct entity from the Lord of Spirits (YHWH) and whose origins precede the creation of the world. In the following passage, the Messiah’s purpose is to support the righteous and be the light to the Gentiles: “And in that place I saw the fountain of righteousness which was inexhaustible: and around it were many fountains of wisdom; and all the thirsty drank of them, and were filled with wisdom, fountains of wisdom; the righteous and holy and elect. And at that hour that Son of Man was named in the presence of the Lord of Spirits, and his name before the Head of Days… Yea, before the sun and the signs were created, before the stars of the heaven were made, His name was named before the Lord of Spirits. He shall be a staff to the righteous whereon to stay themselves and not fall, and he shall be the light of the Gentiles…” (1 Enoch 48). This role the Messiah ought to perform resembles the one described by the prophet Isaiah (8th century BCE): “It is too light a thing that you should be my servant to raise up the tribes of Jacob and to restore the survivors of Israel; I will give you as a light to the nations, that my salvation may reach to the ends of the earth” (Isaiah 49:6).

The power to take one’s life and punish sin has always been an exclusive prerogative of YHWH, the Sovereign God of Israel. Here are a few examples found in the Hebrew Bible: “See now that I, I am He, and there is no god besides Me, it is I who put to death and give life,  I have wounded and I is I who heal, and there is no one who can deliver from My hand” (Deut 32:39); “The Lord kills and makes alive; He brings down to Sheol and raises up” (1 Sam 2:6); and “For the Lord will execute judgement by fire and by His sword on all flesh, and those slain by the Lord will be many” (Isaiah 66:16). However, in the following passage from the book of Enoch, the Son of Man is sitting on the throne of glory and judging the sinners with the universal authority of YHWH: “And there was great joy amongst them, and they blessed and glorified and extolled because the name of that Son of Man had been revealed unto them. And he sat on the throne of his glory, and the sum of judgment was given unto the Son of Man, and he caused the sinners to pass away and be destroyed from off the face of the earth, and those who have led the world astray… With chains shall they be bound, and in their assemblage-place of destruction shall they be imprisoned, and all their works vanish from the face of the earth. And from henceforth there shall be nothing corruptible; for that Son of Man has appeared, and has seated himself on the throne of his glory, and all evil shall pass away before his face, and the word of that Son of Man shall go forth and be strong before the Lord of Spirits” (1 Enoch 69). In these verses, the Messiah is revealed as an omnipotent sovereign judge, similar to the one found in Isaiah 11:1–5: “A shoot shall come out from the stump of Jesse, and a branch shall grow out of his roots. The spirit of the Lord shall rest on him, the spirit of wisdom and understanding… he shall strike the earth with the rod of his mouth, and with the breath of his lips he shall kill the wicked. Righteousness shall be the belt around his waist, and faithfulness the belt around his loins.”

In addition, a later Jewish text dated to the end of 1st century CE, the book of 4 Ezra, reflects similar messianic concepts. It depicts a magnificent image of the Messiah who evokes fear and trembling as He comes on the clouds of heaven: “Behold, a wind arose from the sea and stirred up all its waves. And I looked, and behold, this wind made something like the figure of a man come up out of the heart of the sea. And I looked, and behold, that man flew with the clouds of heaven; and wherever he turned his face to look, everything under his gaze trembled, and whenever his voice issued from his mouth, all who heard his voice melted as wax melts when it feels the fire…” (4 Ezra 13).

In the Second Temple period, there were different messianic expectations circulating among Jews. Their discussion is beyond the scope of this article. So far, we have analyzed the messianic imagery of the Son of Man. Therefore, Caiaphas, the high priest, rightly understood Yeshua’s statement: “From now on you will see the Son of Man seated at the right hand of Power and coming on the clouds of heaven” (Matt 26:64). It was not a new messianic title coined by Yeshua or His disciples. Yeshua was openly declaring to be the Messiah anticipated in ancient Jewish literature as the visible manifestation of the God of Israel, a fully divine “like a Son of Man”, the eternal Righteous Judge.[1]

It is evident that the high priest was well aware of the messianic speculations circulating in the first century, including the belief in the divine Son of Man. He was probably looking forward to the Messiah’s arrival. However, when Messiah Yeshua came, he did not recognize Him. The high pries merely saw the carpenter’s son standing in front of him. Although Caiaphas’ blindness served to the accomplishment of God’s redemptive plan, let’s not let any one of us resemble that high priest. Let’s not be just “hearers” about the Messiah, but let’s strive to know Him as our Redeemer, Lord, and friend. I would like to end this article with Yeshua’s revelation given to the apostle Yochanan (John) on the island of Patmos. May all the glory and honor be to the Son of Man coming on the clouds of heaven: “Behold, He is coming with the clouds, and every eye will see Him, even those who pierced Him; and all the tribes of the earth will mourn over Him. So it is to be. Amen” (Rev 1:7).